Had an awful Monday, and by that I mean had an amazing weekend. Managed to get through a bottle and a half of wine (alone) and lost £25 at a casino (overly confident about my blackjack skills while drunk).

So after feeling awful on Monday morning, I felt a run was in order. Initially I wanted to cover 5 miles, but only got to mile 4 before thinking, ‘yep, I might actually die here,’ reversing and running back home. On the other hand, it did seem to get rid of my hangover following my shower. So it seems through sheer dumb luck, I have found the cure for a hangover.

To run or eat bacon, hmm…

Also, I’ve so far managed to raise £18 for charity using the Samsung Hope Relay. Still losing out to the guy who’s on £600   from Peterbrorough (damn you!).

I’ve also managed to complete my two week challenge. This challenge technically was finished on Friday, but I forgot to take my measurements. Anyhow, here they are:

Success! Maybe I’ve not yet lost the 2 jeans sizes that people are able to and have done, but every inch lost is an inch I will never see again! Thank you Zaggora!

I’ll be continuing to wear them during my runs of course,  I’m hoping to get it down to a size 8 before August, and then I can finally show of my legs without feeling ridiculously self concious!

That’s all from me for now, me out.

I do love a good bank holiday, especially when it’s the day after another bank holiday. Bless you Queeny!

Woke up an hour before my run this morning, so that I could get something to eat before heading out. For my previous runs I’ve been running on empty and wanted to try something new. Armed with my Hotpants, I ended up running sub 10  minute miles, even though I upped the mileage by another half mile to 3.1 miles. Boo-ya-ka-sha! Sub half hour 5k. I also got a pic while running; it just looked like a really pretty shot, so I went for it.

‘A prettyish kind of a little wilderness’ – if you recognise the quote, ten points to you!

I’m getting nods of recognition in the park now,  becoming something of a regular there now!

Felt like something de-lish for luncheon, and I tried the recipe for something I saw on the Hairy Bikers Bakeation cooked by a yodeller in the Alps. After reading around, I found that the dish was called Kasnocken, made using Spaetzle. Spaetzle is small dumpling cooked in boiling water. Then to make kasnocken (from what I can tell), you sautee the dumplings in butter, onions, chives and garlic and then add lashings of cheddar cheese.

Dumpling mix, and some bacon for the sautee stuff; because everyone loves bacon.

Didn’t have any chives, so added a minuscule amount of spinach for greenery.

Really grateful for my extra calorie burning Hotpants today; those lashings of cheese were sooo good! I justify it with the spinach in there. It’s healthy, promise! 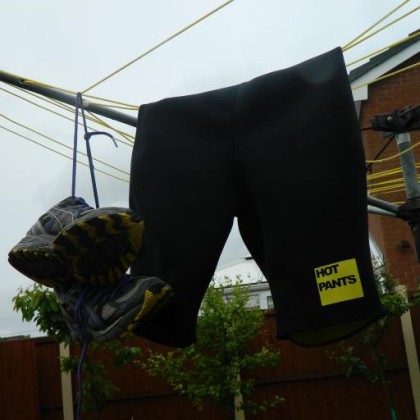